In the Summer of 2019, Popeyes introduced a new product that had fast food enthusiasts excited to taste the chains new addition to the menu, the Popeyes Chicken Sandwich. The sandwich is described as “Crispy” by Time Magazine, “Delicious” by Eater, and “Fresh” by Thrillist. Popeye’s Chicken Sandwich consists of a fried chicken fillet, sour pickles, mayo on a brioche bun. The already popular sandwich soared to new heights, as a feud between it and Chick-fil-a’s signature Chicken Sandwich blew up on social media with countless memes and posts on their opinions. But in an age where social media has taken over mainstream popularity, Popeyes wasn’t prepared for the amount of chaos that would arise from this simple product. Lines piled up as anyone and everyone who had heard about the competition between these two franchises were lining up to taste the sandwich and form their own opinion. Popeyes began to sell out of the product which had people furious. Things eventually got so out of hand that the franchise had to remove the chicken sandwich until further notice. Which led to people selling the now unobtainable product on eBay for over hundreds of dollars even though it was only being priced a four dollars apiece at Popeyes.

“People were being a little overdramatic but honestly this sandwich is pretty good,” Blanco said.

However, people can now get in line to try a regular or spicy chicken sandwich as the sandwich is now back on the menu as of Nov. 1 and it has people itching to go try it. Although it does not have as much publicity as it had over the Summer, the sandwich is still gaining Popeyes a significant amount of customers affecting the business in a positive manner.

“It really affected the business a lot when it first came back… it was a real big hit, tons of people were waiting in line for it,” Blanco said. “I think they’re selling the sandwiches again for marketing purposes it was a real good idea for Popeyes to take it off because now that it’s back people are curious to try it again.” 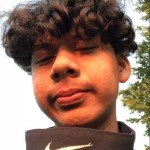