The Cain Live newspaper staff has been working for the past couple of months to receive national recognition from SNO, a scholastic media company that advises student newspapers across the nation. Furthermore, Cain Live has officially become a SNO Distinguished Site as of Monday, October 29, 2019. They earned all six badges needed to achieve this award, those being Writing Excellence, Audience Engagement, Multimedia, Story Page Excellence, Continuous Coverage, and Site Excellence.

Cain Live held second place in the Distinguished Site leaderboard and was 39 in the Best of SNO rankings.

Climbing up the ranks against over 200 other schools participating across the country may seem near impossible for a new school, but Cain Live knew that they’d get it for the second year in a row. Moreover, this is the third time a KISD school has earned distinguished site status. The last time it happened in the district before Cain was back in 2012 at Klein Collins.

“I feel really accomplished seeing as how we’re a two-year program and we’re really dominating in the district,” sports editor Sariah Penn said. “We’re working really hard and to see it get recognized is amazing.” 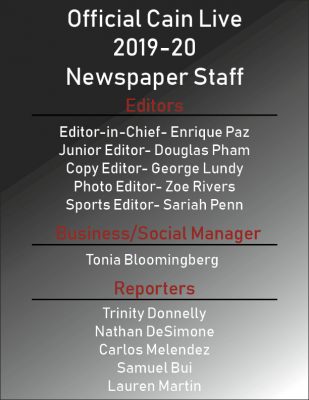 The staff has been increasing the past couple of years, with reporters, editors, and photographers. Everyone has their roles and jobs needed to be fulfilled, and each person has repeatedly worked to get to where they are now.

“My job is to manage and edit photos and media for the website,” photo editor, Zoe Rivers, said. “I regularly go on photo assignments and make sure the visual and caption aspects of the articles are in good quality.”

Furthermore, writing professional articles are a major part of maintaining continuous coverage. For articles to be accepted into Best of SNO, they must meet requirements that hold them in the highest quality. According to staff, it’s difficult to get content submitted, yet a few reporters have already managed to get their stories published.

“Getting the Best of SNO certificates really helped confirm that the articles we were putting out were quality,” reporter Trinity Donnelly said. “You never know if what you’ve created will be received. Having two Best of SNO articles helps confirm that the work I’m putting in is actually producing the quality articles I intended.”

The staff reporters have managed to get four of their articles published on the Best of SNO website, which is already a task upon itself. There are multiple requirements to get an article accepted to them, and they often have high standards on what they accept from the school newspapers.

“The biggest obstacle was making sure the article was the quality I wanted,” Donnelly said. “Making sure that an article is both quality and timely is often more difficult than it initially seems to be.”

There are deadlines reporters are required to meet each week, and editors are repeatedly making sure they’re published on time.

“Watching this program grow in their accomplishments has been incredible. The fact that these student journalists were able to grab this title and bring it back to Klein ISD consecutively is a huge testament to their work ethic,” journalism teacher Jacob Elbert said. “I’m incredibly proud of the program and can’t wait to see where they drive Cain Live in the coming years.”

Besides teaching the pre-requisite journalism classes, Elbert also advises the student publications, including Broadcasting, Newspaper, and Yearbook. He’s proud to see how far the once minimal staff of two has grown to a fully functioning newsroom.

“I feel as though journalism has given me the ability to express my love for entertainment and share it with the students of Klein Cain High School and I think it’s pretty cool that I am a part of a nationally distinguished site,” reporter Samuel Bui said.

Bui specializes in covering entertainment news and review articles for the website and newspaper. This is his first year on staff and has been growing in skill as he continues to produce content regularly.

“Honestly I don’t find it very difficult finding coverage and obtaining the badges,” business and social manager Tonia Bloomingberg said. “Journalism is something I’m passionate about and desire to do. It doesn’t come as a burden, it comes as something enthusiastic.”

The journalism program has paved the way for student journalists to do something impactful to the community. They have the opportunity to use a variety of skills that can be incorporated into their future lives and careers. The staff is excited to achieve more.

“I’m interested in this program because it allows me to do what I love doing while also getting career practice,” copy editor George Lundy said. “I’ve always enjoyed writing, and I plan to pursue journalism when I grow up. Cain Live is one of the best programs around for aspiring writers.”