The Homecoming prince and princess were officially announced yesterday at the Homecoming football game. The stands were filled with organizations and a cheering crowd supporting the athletes in their game against Klein Forest.

The crowned prince and princess are Andrew Hoegsberg and Evelyn Hollingshead.

According to those who attended the game, the 2018 Newcoming went well.  The Hurricanes won by a large margin, 56-39 over Klein Forest. 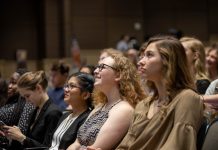